The Satan's Knights MC New York Chapter, Book Thirteen
Walking the line, exercising self-control, and respecting boundaries was never my thing.
Thou shall not covet thy neighbor’s wife—it’s one of the ten commandments and the number one rule you don’t break when you’re a prospect for the Satan’s Knights. I fell in love with the former vice president’s wife. A lethal mistake on my behalf, that only left me bitter and standing on the edge of an overpass.
I would’ve jumped if it hadn’t been for the terrified girl, crying on the other side of the fence. She was seventeen and the district attorney’s daughter. She was also pregnant with my little brother’s baby. Desperate to avoid the wrath of her powerful father, she hid her pregnancy and protected us all in the process.
If anyone deserved a happy ending it was Carrie.
What she got instead was a damn tragedy. The kind of unimaginable horror that crushes your soul and breaks your heart. Now, we’re both standing on the edge of the overpass, walking a different kind of line, ready to jump. ​ 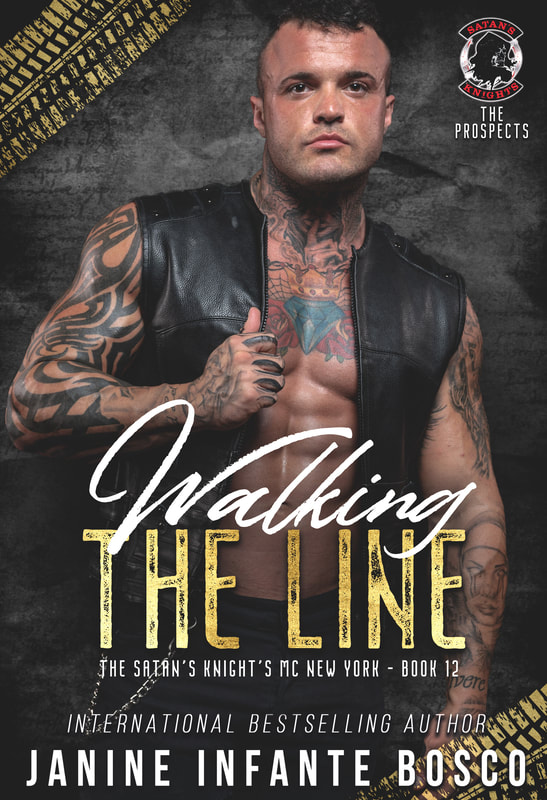 "Walking The Line is the third book in the Satan's Knights Prospect Trilogy, and I think it's Janine Infante Bosco best story she's ever written. This story has so much more in depth and emotion, than her other ones. The heartache, gosh did my heart hurt, I was a wreck while reading it, and so many times I had to stop because I couldn't see through my tears. But it's still has the fast pace, action with the gritty club sh*t, and the club family coming together in a time of need. If you haven't started this MC series yet, then run and grab it, it's a must read!"