The Satan's Knights MC New York Chapter, Book One
Once, I thought I was meant to be a hero.
I’ve got a tattered American flag and the scars to prove it.
But I survived war just to live in hell.
And it turns out what I really am is a drifter.
A man born to ride through this world alone.
A former nomad who now rides with the Satan’s Knights of Brooklyn.
I'm drifting into a brand new kind of chaos.
The kind with luscious lips and intoxicating eyes.
A girl who doesn't need a hero.
Until she does.
Until her power and control are tragically stripped from her.
But a broken man who dances with the devil isn't meant to save anyone.
​
***NOTE:Contains explicit sexual situations, violence, sensitive subjects, offensive language, and mature topics. Recommended for age 18 years and up. *** 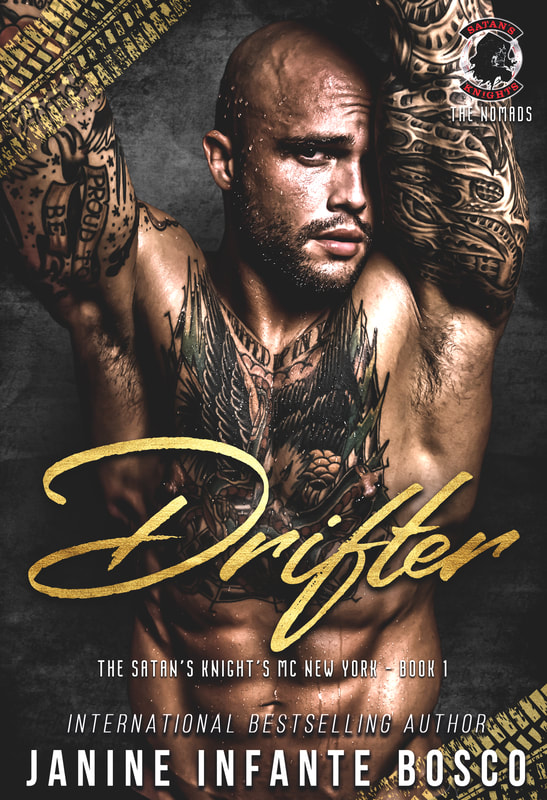 "This was my first read by Janine and I'm hooked!
Drifter was a wonderful, well told story which escalated a bunch of emotions.
I really wanted to hate Stryker because of many of his actions toward his new love Gina, but it's easy to forgive him knowing what runs through his head when his PTS flairs up and you know exactly what he's experienced as a war survivor.
Prepare yourself, there is a scene in this book that some would say, this book requires a trigger warning. What Gina experiences will tear you apart and make you feel sadness, not only for her but for anyone who has ever experienced the things she does. Fear not, Stryker is a hero in his own way, and as an MC biker, you don't need cops to catch the villain, especially not when you could be considered a villain yourself.

This wonderful five star book ends with NO cliffhanger, but prepares you to want to immediately download the second book in the series, because there are characters in this book, you'll want to know more about, and you'll get that chance in the second book."